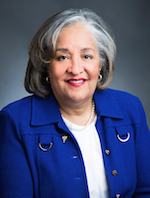 “Maria has been a trailblazer throughout her career,” said Council of New Jersey Grantmakers Board Chair William V. Engel. “We turn to her to help the state’s diverse and dedicated philanthropies to be even more effective in their quest to make this a better place.”

The Council of New Jersey Grantmakers is a nonprofit organization of over 130 members representing the philanthropic community in the state. Members include family, private, community, independent and corporate foundations, and corporate giving programs.

“I am very excited about joining the Council of New Jersey Grantmakers as its CEO and working with dynamic individuals — many of whom I have known and respected throughout my nonprofit career,” Ms. Vizcarrondo said. “Most importantly, I look forward to forging partnerships that will advance the Council’s social impact as a sector leader in New Jersey communities, the region, and nation.”

Ms. Vizcarrondo, who spent most of her career in northern New Jersey, comes to the Council from Cabrini University in Philadelphia, where she most recently was Director of Community Development and External Relations. She was inaugural Executive Director of the school’s Nerney Leadership Institute, launched in 2013.

Ms. Vizcarrondo brings more than 25 years of experience transforming service organizations and has served her communities as both an appointed and elected official.

In 2006, when he was first elected Mayor of Newark Cory Booker tapped Ms. Vizcarrondo to head Newark’s Health and Human Service Department, the largest of its kind in New Jersey. One of her first actions in that role was to develop a Children’s Bill of Rights to benchmark improvements in the lives of children and families throughout the city. Her accomplishments included securing state funding to establish Family Success Centers to provide neighborhood- based services, and launching a major citywide campaign to raise the immunization rates of Newark’s children.

Prior to her mayoral appointment, Ms. Vizcarrondo served as the first woman president and CEO of United Way of Essex and West Hudson. Her pioneer work in re-engineering the organization’s mission into community building was documented in the United Way Transformation Diaries. In the aftermath of the 9/11 attacks, Ms. Vizcarrondo led the New Jersey United Ways in a statewide coordination of services for affected families and managed the distribution of corporate funding for these efforts.

She was elected Essex County Surrogate in 1993 and served four years of a five-year term before leaving to join United Way.

Ms. Vizcarrondo has been listed among the “100 Most Influential People in New Jersey” and was a founding member of the New Jersey Institute for Social Justice.

To dig deeper into causes of, and responses to, structural racism within philanthropy in New Jersey, the Council of New Jersey Grantmakers established a Racial Equity Task Force made up of leaders at CNJG member organizations.

Novartis US Foundation has announced a total commitment of $25 million to develop partnerships and fund community organizations and programs that address health inequities, with a focus on diversity in clinical trials, in the United States.

TD Charitable Foundation has increased the amount of money available in its Housing for Everyone grant competition to $4.9 million this year, up from $3.75 million in the previous year.