Superstorm Sandy officially came ashore in New Jersey on October 29, 2012 at 8:00 p.m. and its aftermath continues to be felt in communities throughout our state. Not 24 hours after the storm made landfall, CNJG began planning a series of actions to help inform funders what to be prepared for, share information and discuss strategies. CNJG's support of the philanthropic community as it navigates the shifting landscape of disaster recovery, continues.

CNJG has been working closely with their philanthropic members in New Jersey and their philanthropic colleagues from around the nation who have experience in disaster philanthropy, as well as working cooperatively with the Governor’s Office on Recovery, FEMA, NJ State Police Office of Emergency Management, NJ Voluntary Organizations Active in Disaster, NJ’s Long Term Recovery Group Leaders, and NJ’s leading nonprofit organizations.

Beginning one week after Sandy struck New Jersey CNJG launched a weekly conference call series for grantmakers to hear from policymakers, disaster relief/recovery experts and colleagues who have been through similar catastrophes. Grantmakers heard from nearly 70 guest speakers including policymakers, disaster relief and recovery experts, and statewide and national foundation leaders that have experienced similar catastrophes. The briefings provided an opportunity to connect directly with local leaders and state officials addressing the many needs of our communities. Grantmakers learned about issues related to both disasters in general and Sandy recovery in particular. Topics included housing, mental health, social justice, universal design, FEMA’s National Disaster Recovery Framework, and an array of environmental issues. All of the calls were recorded and also transcribed into concise written summaries and are available on our website. 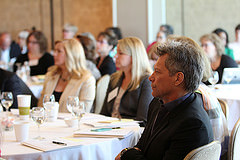 With support from the Jon Bon Jovi Soul Foundation and OceanFirst Foundation, CNJG presented a specific briefing on housing, hunger and mental health recovery efforts and needs 18 months after the storm. We heard personal stories from families that were displaced and their long struggle to rebuild and recoup. We heard insights from service providers on the long term effects of Sandy. Several Long Term Recovery Groups described some of their ongoing challenges, but also shared what was working. 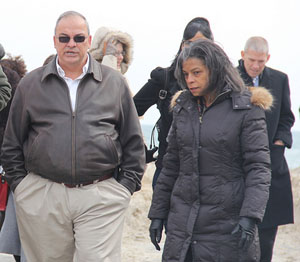 CNJG offered its members a rare opportunity to tour several of the disaster-affected communities in Monmouth and Ocean Counties and to hear from those on-the-ground. Throughout the day, twelve guest speakers representing all areas of the effort, including individuals from FEMA, local and state government, Long Term Recovery Group leaders, city and state planners, environmental professionals, social services personnel, and faith-based leaders, among others spoke to a group of 60 philanthropic leaders. Building upon the first successful Coastal Communities Site Visit Tour, CNJG offered a similar program focusing on communities in northern New Jersey – specifically the hard hit areas in Essex, Hudson and Bergen Counties. In addition to hearing from a wide range of local officials, Long Term Recovery Group Leaders, urban planners, and environmental experts, the site visit included a tour of a PSEG sub-power station which was flooded.

Bringing together an incredible community of funders, providers and practitioners for a day of exploration, shared learning and discussion at the Spring 2013 Conference for the Social Sector - Our Shared Road Ahead: Sandy and Beyond on June 10. The Conference provided participants with an important opportunity to hear about the lessons learned by social sector colleagues and experts around the country who have grappled with how to create effective long-term philanthropic responses to catastrophic events in the absence of a readily available guide.

Philanthropy & Hurricane Sandy: A Report on the Foundation & Corporate Response is a report released in October 2014 by CNJG and partners that examines the response of foundations, corporations, and other institutional donors to the devastation wrought by Hurricane Sandy in October 2012. Numbering nearly 600, these funders have so far committed more than $380 million for relief, recovery and building efforts. The hard data and reflective observations in the report contribute to the growing body of knowledge that helps foundations and corporations be strategic and effective with their giving when disaster strikes.

Two years after the historic storm, this report breaks down the allocation of dollars contributed thus far and offers perspective on the role of private giving in disaster response and lessons to be taken from this one. The report was published by the Foundation Center in partnership with the Council of New Jersey Grantmakers and Philanthropy New York, and with support from the Center for Disaster Philanthropy.

Specifically for funders wanting to share information, news related to their own initiatives and/or NJ’s recovery and rebuilding process. If you are a funder (either in NJ or out-of-state) and are interested in joining this listserve, please send a request to Craig Weinrich.