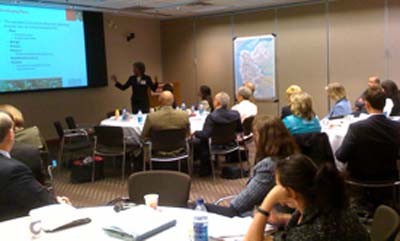 With support from the Campbell Soup Company, Annie E. Casey Foundation, the Wells Fargo Regional Foundation, and the William Penn Foundation, CNJG is pursuing a long-expressed request from several members to create a forum focused on the City of Camden - providing convenings, as well as information and resources for the many grantmakers working in the city. As a precursor to this forum, in April 2009, CNJG convened a group of Camden funders for a briefing with representatives from the Governor’s Office and the Camden Redevelopment Authority at the Campbell Soup Company. After the briefing, CNJG members expressed an interest in continuing the dialogue, sharing information about the philanthropic activity in the city and exploring opportunities for the future.

CNJG launched the Camden Funders Affinity Group in February 2010, inventoried current philanthropic investments in Camden, established an interactive map of funders’ investments, provided a Camden Funders Listserve and disseminated the “Camden Weekly News Round Up” for Camden grantmakers from 2010 to December 2011.

With support from the Ford Foundation, William Penn Foundation and other local donors, CNJG was also instrumental in assisting the planning and development of the Community Foundation of South Jersey. Today CFSJ focuses its giving on the eight counties in Southern New Jersey, including Camden County.