Philanthropy has played a vital role in Newark for decades. In 2007, in collaboration with the Office of the Mayor, CNJG hired the city’s first liaison – modeled after a similar position in the State of Michigan – to harness interest, foster greater effectiveness and attract resources toward policy and programmatic areas that affect Newark’s residents. In the years since, the Council’s Newark Philanthropic Liaison has become a model for the country.

Newark is one of the only places in the country to designate someone on staff with the explicit role of engaging foundations for the funding of public projects.

Newark Mayor Ras Baraka and Myung Lee, Executive Director of Cities of Service, author this blog post on the benefits of addressing urgent economic and social needs in your local community.

Kevin Callaghan, CNJG’s Newark Philanthropic Liaison, along with the city of Newark, have coordinated a philanthropic response to helping the residents of Newark with their water. This two-page overview offers suggestions for how philanthropy can assist with short-term and long-term needs. To help support the efforts, please contact Kevin.

To stay up-to-date on their efforts, visit the Newark Water Challenge area of our website.

At the October Grantmakers for Education Annual Conference in Washington, D.C., the Newark Funders Education Committee presented a workshop called “How Not to Read the Prize” to a standing-room-only audience of national, regional, and local foundations.

When Mayor Ras Baraka took office in 2014, he immediately called for an expansion of the city’s Summer Youth Employment Program.

There is a growing body of evidence that youth employment programs are a positive intervention that ..

We are pleased to share Strengthening Philanthropy in Newark Report to the Field 2013 – 2014 from the Office of the Newark Philanthropic Liaison. This report highlights a number of public-private partnerships guided by Liaison Jeremy Johnson. 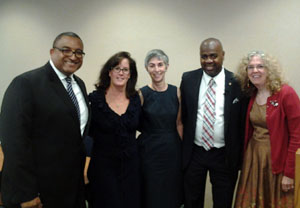 Newark Mayor Meets with CNJG Membership
August 5, 2014
Newark’s 40th Mayor Ras J. Baraka (pictured, second from right) invited the Newark Funders Group to hear his vision for the city at special August meeting. Just 30 days into his term, the Mayor called on the Newark Philanthropic Liaison Jeremy Johnson (far left) to organize a convening with the Newark group, co-chaired by Etta Denk of Bank America (second from left) and Barbara Reisman of the Schumann Fund for New Jersey (third from left). Irene Cooper-Basch (far right), Chair of the Council of New Jersey Grantmakers and Executive Officer at the Victoria Foundation, introduced the Mayor to more than 50 grantmakers who attended the session at the PSEG headquarters in downtown Newark.
Newark Selected to Participate in Postsecondary Education Attainment Strategy
June 5, 2014
The Lumina Foundation has announced a second cohort of communities - including Newark, NJ - to participate in an initiative to increase the number of local residents who hold postsecondary credentials.
CNJG’s Newark Liaison Featured in National Magazine
January 12, 2014
In the December issue of Governing magazine, a national trade publication, a featured article “But what did Cory Booker actually accomplish in Newark?” cites the Council of New Jersey Grantmakers and Jeremy Johnson, the Newark Philanthropic Liaison, in connection with the public-private partnership to establish the Newark Office of Reentry.
Newark Collaboratives Target Common Goals
July 9, 2011

The City of Newark and Newark Philanthropic Liaison are working closely with several consortia of nonprofits to address some of the City’s most critical challenges.

Observations on “Newark Symphony Hall Reimagined”
June 2, 2009
On a recent Saturday, the Jeremy Johnson, the Newark Philanthropic Liaison and over 150 arts lovers, historians, and community leaders gathered to reflect on the past, acknowledge the present, and imagine the future of the historic Newark Symphony Hall. The liaison shares his observations from the conference.
Improving Access to Fresh, Affordable Foods
December 2, 2008
Through the office of the Newark Philanthropic Liaison, CNJG recently had the opportunity to convene a group of funders with the Brick City Development Corporation (BCDC), a nonprofit that is working with the City of Newark to improve access to fresh, affordable foods for Newark residents.
$5 Million Prisoner Re-entry Initiative for New Jersey and Newark
September 9, 2008
Private donors including three CNJG members contributed $2 million in matching funds to a $5 million grant to support Newark residents returning to their homes and communities from prison over the next two years.
A Partnership for Newark's Children and Families
June 1, 2008
In 2001, the Schumann Fund for New Jersey and 10 private and corporate foundations agreed to collaborate on the multi-year Newark Lighthouse Initiative. The Initiative, led by two state nonprofit partners, the Association for Children of New Jersey and New Jersey Community Capital, had program and policy goals: to help three Newark-based early childhood programs move from good to exemplary, and to identify policy changes that would be necessary to enable other early-childhood programs to engage in similar efforts.
Funders Partner to Strengthen Newark Schools
May 6, 2008
A $19 million landmark award that will strengthen Newark public charter schools, comprises grants from seven funders including four national family foundations -- the Bill & Melinda Gates Foundation, Doris & Donald Fisher Fund, Robertson Foundation, and The Walton Foundation -- and three New Jersey funders -- the MCJ and Amelior Foundations, Prudential Foundation, and Victoria Foundation.